I always wanted to write a bit about the origins, inspirations of the game, so let's begin :)

Master of Orion is probably the one that influenced the design by most. To be exact, the first part of MoO. While the second part was also really good, it sometimes required too much micro-management to my taste. The mechanism that you have to improve your propulsion technology before venturing further was clearly inspired by this game.

Space Empires is another game that was really fun. My only problem was that it really required a lot of time if you wanted to be effective in it, since it was a very deep game, also micro-managing your colonies became tiresome after a while.

I already mentioned Desktop Dungeons on the earlier posts; the simplicity of the design was the main point there.

Stars! is an other space strategy that remained relatively unknown, probably due to the almost non-existant graphics. The race creation is really deep here, but this game also requires some serious commitment before it truly begins to shine.
Posted by The Goblin Lunatics at 8:56 PM No comments:

I'd like to write a few words about the responses to the game and how they affect the future development of "10 min space strategy".

First, most people who wrote their opinions enjoyed the game and found it easy to understand, which is a big plus (we also got some media attention at Spacesector :) ), also most people didn't find any bugs, which is also very good for a game still in development.

On the other side there are several recurring issues, probably the most important being fleet splitting. We don't have any tutorial yet to cover this aspect of the game, but I think that we have to make this more straightforward anyway.

Some people mentioned that it is hard to gasp the concepts of bombing planets; when you move your bombers above enemy planets, it seems that nothing is happening, since bombing begins only in the next turn. We are thinking about how to solve this issue.

The third problem was that the researchable unique techs were somewhat hidden; we could solve it by having the empire panel open at the beginning of the game. So players can instantly observe what unique technologies they got.
Posted by The Goblin Lunatics at 9:00 AM No comments:

About music and sound - part 3.

Usually, i like to create the music first then the sound effects. But this time it was the other way around.
Archenemy sent a list to me with his ideas, he described the sounds that were needed to cover all parts of the game.
I must say, his ideas were great, gave me a clear direction so my job was easy :)
All i needed was some cool bleeps and bloops with swoosh and kabooms. Well, that was almost all.
I was searching on the internet for computer noises, bleeps, electronic zapps, etc, etc. After i've collected a lot of wav's i started to create my own stuff.
A bad sounding deep noise could work well with a high frequency computer beep, sometimes this is the trick.
Layering multiple sounds, using eq to separate frequencies and pitch shifting is easy to create unique but high-tech noises.

The sounds must be cool, they have to match their function. Eg. a menu click must be simple and if it annoys the player after ~30 clicks then it is a bad sound. If a fleet moving sfx can be recognized as racing cars then the sound effects is bad, bad, bad!
Important sounds should be louder while we can keep the others quieter, the overall balance should match the music loudness.
Oh, and don't forget the fact that sound and music need to be approximately on the same tone, otherwise they will be disharmonic and might be annoying to the player.
I was lucky because it was easy to pitch the musical sounding effects to the music base note and they still sounds good :)
After HomeGnome implemented all the sounds to the game i was surprised, only the fleet moving sound was annoying and a bit too long for the visual effect.

And now, i'd like to share a screenshot of a layered sound (colonize sfx), made in Adobe Audition: 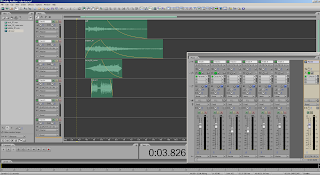 Posted by The Goblin Lunatics at 12:55 PM No comments:

Until you're waitin' for the next issue of sound article we'd like to share a screenshot of the new and improved combat interface: 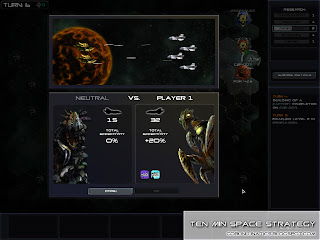 Posted by The Goblin Lunatics at 3:17 PM No comments:

Email ThisBlogThis!Share to TwitterShare to FacebookShare to Pinterest
Labels: screenshot

About music and sound - part 2.

It is not a new invention to use two (or more) layers of music -one for ambient and another for action. The way how you implement could be new and exciting :)

We can synchronize the tempo of the two music (using the same bpm/tempo). We can use markers in the waveform to create syncpoints for fading in/out.
We can use a database with unique syncpoints, layer positions and music themes. We can make realtime calculations during in-game to change from ambient to action music. We can. Oh, yeah we can!
Or we can play the ambient music continuously then fade it out when a battle happens, throw a short action music in, loop it, and fade it out after the battle. These are simple but effective solutions for our problem.

My idea was to compose all music using the same tempo and same key note. Fading between them could be easy this way and the listener would’nt be confused with different, not common tonal and/or tempo changes. Plus the global tempo of the game will be the same and we could keep a constant, linear atmosphere-feeling.

I started with the in-game ambient music. It wasn't too hard to build up slow atmospheric pad sounds, but it was hard to make them interesting after 30 seconds. Evolving pads, filtered noises, reverberated sound effects are the key to compose cool ambient music and it was my goal, too.
There wasn't much movement in the music when I tried to add another other layers with drums, faster bass and killing distorted guitars.
Then I realized that it won't work without removing some of the deeper-lower ambient pads because of the sub-bass murmurring and colliding with drums.
Basically, this was the trick i did, composed a full track, filled it with a lot of instruments, this is the action layer. Later i removed the percussion and bass stuff and *pooof* the ambient layer was born.

Well, they sound great in game, cross-fading is flawless. But something was missing and soon i’d realized that we needed more music for wining/loseing and menu as well.
Okay, then let's compose a dark, sad piece of music for losing and a bit more upbeat and happy theme for winning the game.
These are much shorter (~1min long only) than in-game tracks (way over 5mins.), their main function is to give the feeling of winning/losing. Is that obtained..? :)

I must say, the menu music is my favourite. Why? Because there wasn't any expectation like "it should be exchangeable with another music" or "it must be sad/happy", etc. It is sharp, powerful, you hear this first when you start the game and it sets the mood immediately. At least, i hope it does the job :) ).

Attention! Unusual dry statistic data will follow:
Used software and hardware:
I'll write some words about sound effects next time. Until then, here is a surprise to you all who like the music of 10 min space strategy:
http://soundcloud.com/strayboom/strayboom-enter-hyperspace
Posted by The Goblin Lunatics at 9:00 AM No comments:

About music and sound - part 1.

Hi there!
I'd like to write some words about the music.
In 2009 HomeGnome and me were working together on a Commodore Plus4 game remake (Fingers Malone) and it was a great success. The game was great, the cooperation-work went flawlessly, and in 2010 we finally met personally at a demoparty! :)
After he asked me to compose music for 10 min space strategy I was more than happy.
Space, scifi, space battles, fighters, etc, etc, these are heartwarming words to me, and everything that is scifi related inspires me a lot.

Tho, there is only killer vacuum without any sounds in space, the game would be flat without any sound and music :)
So, how the hell can we picture the athmosphere out there?
Well, think about the good old scifi movies from the 60-70's. Everything is goin' slowly, story elements are secondary, focus is on the coldness-darkness of space. Instrumental music, Vangelis, good old analogue synthesizer sounds -sometimes mixed with orchestral stuff. Sound effects are coming from synthesizers, bleeps-bloops, twangs, etc, etc.
This is good for a start but not enough for 10 min action. Let's see what is common in today's scifi movies?
Electronic instruments are dominating, sometimes mixed with fast percussion themes while we are in action.
Wait...! Action! That's what we need!
Now there is slow ambient music while you're makin' your moves on the map and we change it to action if a space battle happens. This is a great combination of the two styles, ambient music helps you to set a "space-mood" and the action is faster-dirtier-filled with more instruments and movement.
The only question is: how you can make the transition between ambient and action music without gaps, without any strange fade in/out?

I'll tell you more about technical details in the next part. Be prepared! :)
Posted by The Goblin Lunatics at 11:25 AM No comments: